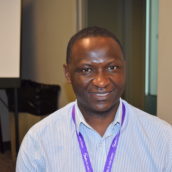 “I love what I do, and I back up what I think with action on road safety matters.”

Daniel Mwamba was shocked by the situation he observed on the roads in his country. They were poorly constructed and maintained, drivers were speeding and not following traffic rules, and pedestrians faced perilous conditions as they navigated or tried to cross the increasingly busy roads. He founded the Zambia Road Safety Trust (ZRST) in 2014 to address some of these issues, with a focus on child and pedestrian safety and driver education. While ZRST do face-to-face work with schoolchildren and drivers, Daniel has also made extensive use of the media, writing a regular column for the Daily Mail and doing radio interviews and talk shows.

Daniel applied to be an Advocate because he wanted to strengthen his advocacy skills and improve his understanding of road safety issues. He left Memphis with much more. In particular, Daniel has used the new skill of power mapping to improve his approach to engaging with high-level decision makers and stakeholders such as the Ministries of Transport and Health, the police, FIA Foundation, WHO and UNDP. He feels this has improved the visibility of ZRST and helped him to establish trust for future collaboration and financial support. He has also been using new approaches to fundraising to develop proposals for ZRST education programs. Three of five proposals have been successful leading to a 300% increase in funding. As another indication of the growing role and capacity of ZRST in the road safety sector in Zambia, Daniel has been appointed as the National Data Coordinator for the 4th WHO Global Report on Road Safety.