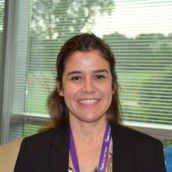 “As a researcher with FGR, I get to contribute to society doing what I enjoy most.”

As the Research Department Coordinator for the Fundación Gonzalo Rodríguez (FGR), Florencia Lambrosquini’s work is focused on building the evidence base on child road safety in Uruguay and other countries in the Latin American region. They share the findings of their research through training and advocacy with government officials, law enforcement officers and other road safety stakeholders. Prior to 2014, the law requiring seat belts to be worn did not include children; FGR was instrumental in providing technical advice for amendment of the law, which now makes the use of child restraints mandatory until the age of 12. FGR supports their advocacy with a public service to advise families on correct installation and use of child restraints.

Florencia applied to the Alliance Academy because she wanted to be able to put the findings of her research into action. At the time, Florencia was conducting a study in 45 cities in six countries regarding children on motorcycles. While it is understood that motorcycle users are at greater risk of crash-related injury and death than other vehicle users,[1] FGR sought to understand the scope of the problem and establish baseline data specific to their regional settings. FGR wants to be able to reduce child injuries and fatalities on motorcycles by sharing and applying the study findings through more effective advocacy and communication for behavior change. The FGR advocacy and communication plan is now based on a key message that derives from the results of the research and encourages compliance with the law—with requirements on clothing visibility, height of the child rider, use of a helmet and safe riding positions. The findings will also serve as the basis for a media campaign and a safe school zones project that are now being developed.

As a participant in the Alliance Academy, Florencia learned about developing a program framework, planning a strategic advocacy campaign and communication skills for getting her message across. She had never prepared a press release before she went to Memphis, and she was not familiar with many approaches to delivering an effective presentation. As a research specialist, she had previously communicated in the ‘language’ of research. She feels that she is now more capable of persuading an audience of the importance of her message, which will be important as she communicates with policy makers and with the public.

The findings have now been presented in a press conference during the Fourth UN Global Road Safety Week in Montevideo and during a regional conference attended by 60 people in Costa Rica on 22 June 2017. The findings have also been discussed in 14 radio interviews and 27 TV interviews around the region, and the study report has been sent to 19 key policy makers in the study countries.

[1] In Latin America and the Caribbean, road crashes are the leading cause of death among children 5–14 years of age, and the second leading cause of death among people 15–44 years of age. In many countries of the region, half of these fatalities are due to motorcycle crashes, while the other half are crashes involving other vehicles and pedestrians. (Study of children transported on motorcycles in Latin America, FGR, 2017.)