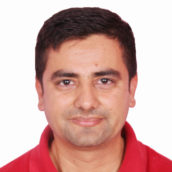 “The most meaningful work we have been able to do is the formation of a national road safety alliance, bringing different actors together for synergies and reduced duplication.”

Milan Dharel is a university professor working in the area of human rights. He and his colleagues at Swatantrata Abhiyan Nepal (SAN) consider road fatalities a serious violation of human rights to safer mobility, health and life. However road safety in Nepal is undermined by the lack of enforcement of existing laws, poor road infrastructure and the unsafe behavior of pedestrians.

Since 2015, the Transport Management Act has authorized police to impose fines and simple corrective measures to compel drivers to follow traffic rules on drunk driving, noise control, and pedestrian safety. The Government of Nepal has now drafted a new road safety law. SAN sits on a parliamentary sub-committee that is still reviewing the law and advises on how to strengthen the pedestrian safety components of the law, especially through public education. SAN has also been working on creating a national road safety alliance to accelerate action in all seven provinces. To date, the alliance is established in 10 districts of three provinces, with 11 stakeholders in Kathmandu forming the national coordination body.

Political instability and a lack of resources for road safety have posed significant challenges to SAN work. However, new leaders have emerged at the local level in recent elections, and they have more authority than they did in the past. So SAN is putting more effort into action at the local level, building alliances that can be leveraged for more influence at the national level.

When he went to Memphis, Milan hoped to learn advocacy skills to strengthen his capacity to engage with key decision makers and to build his network of road safety colleagues from other parts of the world. New skills in power mapping and message development have been especially valuable in his continuing efforts to engage with the Ministry of Transport and traffic police to influence policy at the national level. In Memphis he was advised to consider focusing on a narrower area of road safety, in a specific location, as a way to produce concrete results that could influence higher-level advocacy on national policies.

Milan has channeled this advice into his work on the Smart City Agenda with safe school zones as a component of this initiative. Fifteen schools in the city of Lalitpur were targeted for the initial phase. SAN hosted a coordination meeting attended by education officials, traffic police and municipal authorities to discuss the project and to build a coalition of stakeholders. Consultations were also held with the boards and parent-teacher associations of the 15 targeted schools. Thirty volunteers were identified through the local Municipal Office and trained in road safety; they will be responsible for training parents and students on road safety with an emphasis on safe school zones.

SAN is part of a group planning to host a road safety conference for South Asia to build South-South cooperation on these issues. If new funds are secured, SAN sees the need for development of a road safety action plan, and they would like to host a conference of mayors to launch this plan. In 2018 SAN will begin to provide training for local road safety NGOs that will incorporate some of the skills covered in the Memphis training such as identification of key decision makers and effective advocacy.