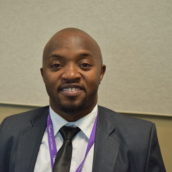 “It is very fulfilling working everyday to prevent unnecessary loss of young lives, lives cut short before they even start.”

Simon Kalolo has met many parents whose children were injured or killed in road crashes, and their stories drive him forward. Preventable crashes—caused by poor driving, inadequate infrastructure, and lack of knowledge among children about pedestrian safety—are central to Simon’s work with AMEND. With a background in project management and a passion for education and working with children Simon contributes to making school zones safer through infrastructure improvements, education and research.

From 2015–2016, research conducted by AMEND in collaboration with the US Centers for Disease Control and Prevention revealed that the AMEND school safety program—School Area Road Safety Assessments and Improvement (SARSAI)—has contributed to the reduction of a range of injuries related to road crashes near schools, most notably a 42% reduction in injuries sustained while walking to and from school. The study found that for every 286 students at SARSAI implementation sites in Dar es Salaam (over 46,000 who have been reached by this program to date), one injury is prevented every year.

Simon participated in the Advocate training to strengthen his theoretical grounding and practical skills. As an Advocate, Simon is now in a stronger position to advance the road safety agenda in Tanzania and in five other African countries where AMEND is supporting one of its national offices and other local road safety NGOs.[1]

Some of the new skills that Simon acquired in Memphis include coalition building, identification of key decision makers, preparation of press releases, gap assessment, and advocacy. Simon notes robust presentation skills as a particularly valuable asset for a road safety advocate and a trainer as they are essential for bringing government and other stakeholders on board, and they convey information more convincingly for advocacy and for training other NGOs to carry out SARSAI interventions. Simon reports that there has been increased support—and demand—from schools and from the community to improve school zone infrastructure and to equip children with skills to navigate the roads more safely. In 2017, Simon and his colleagues worked to install light infrastructure[2] at one school in Dar es Salaam creating a safer school zone, and approximately 2000 students at that school have received road safety education.

Media are taking notice. After one recent launch event at the school receiving the infrastructure improvements, four newspapers published articles about the project. On the recommendation of his Deputy Director, Simon “shares the wealth” of his Advocate training by observing and critiquing a weekly presentation by one of his colleagues. In this way, the NGO as a whole is also benefiting from Simon’s improved capacities in presentation.

It’s a multiplier effect: visibility, credibility, and impact for AMEND and for road safety in Tanzania and five other African countries are all growing because of one person’s new approach to his work. Simon hopes to leverage SARSAI successes to influence policy changes that will ensure the sustainability of the program. In Simon’s view, urban planning and road safety are key to the future of Africa.

[1] SARSAI is being implemented in 10 African countries with funding from FIA Foundation and Puma Energy Foundation.